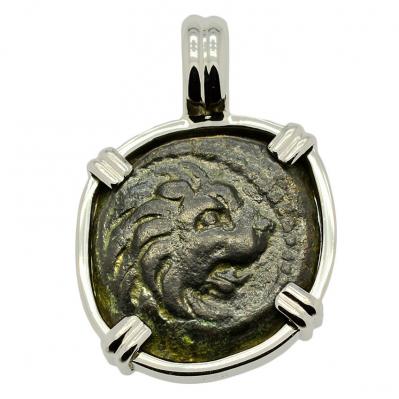 This coin was minted in the city of Antioch, which was located in present day southern Turkey, just north of Syria. This region was under Persian control until Alexander the Great defeated the Persians in the Battle of Issus in 333 BC. After the death of Alexander, this Greek land became the Seleucid Empire, ruled and named after one of Alexander's generals Seleucus I Nicator. With its' prized location along major trade routes, Seleucus founded Antioch and the city quickly prospered, becoming one of the most important cities of the Near East. Antiochos VII was the ruler when this coin was minted in the 2nd century BC. He ruled with competence and integrity, but in 129 BC, Antiochos was killed in battle against the Parthians.
The obverse side of this coin shows the head of the Nemean Lion and the reverse shows the Club of Hercules. In Greek mythology, the Nemean Lion was a vicious monster. It could not be killed with mortals' weapons because its golden fur was impervious to attack. Its claws were sharper than mortals' swords and could cut through any armor.
The first of Hercules' twelve labours, set by King Eurystheus, was to slay the Nemean Lion. Hercules eventually found the lion in his cave, stunned the beast with his club and, using his immense strength, strangled it to death. He completed this task over the course of 3 months when he was just 18 years old.