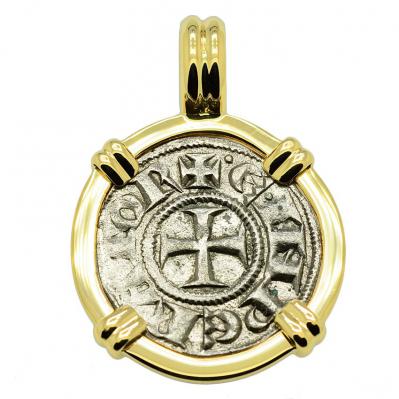 This coin was minted during the rule of King Henry VI and Queen Constance of Sicily in the port city of Messina, located on the northeastern coast of the island of Sicily. Messina was a main departure point to the Holy Land during the age of the Crusades and in 1189, King Richard I "The Lionheart", sailed from Messina en route to the Holy Land for the Third Crusade.
These silver denaro coins were minted to pay the armies of Christian Crusaders and they were also currency for the people. The obverse side features the Jerusalem Cross, also known as the Crusader Cross, with the Latin legend "Henry Emperor". The reverse side shows an Eagle standing with its wings spread and the legend "Constance Empress".
Henry VI, became King of Germany and the Holy Roman Emperor after his father, Emperor Frederick I, died in 1190 while leading an army during the Third Crusade. In 1186, Henry married Constance of Sicily, the daughter of the deceased Norman King Roger II of Sicily. Henry finally enforced the inheritance claims by his wife and conquered Sicily in 1194. At that point, Henry was the most powerful monarch in the Mediterranean and Europe.
In 1197, Henry launched his own campaign known as the "Emperor's Crusade". However, before his departure and while his forces were already on their way to the Holy Land, Henry died of illness in Messina. Despite the absence of their leader, the Crusaders continued on and were successful in capturing Beirut and the Levant coast between Tyre and Tripoli.