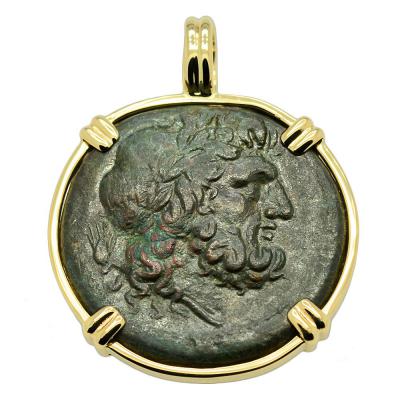 This coin was minted by the Brettii people in the region of Bruttium, which was located in present day Southern Italy. There were many Greek colonists, who settled in Southern Italy and they had brought with them their Hellenic civilization. By 250 BC, the Brettii had become the predominant power over most of Italy south of the river Laos. Their rising power, however, was eventually challenged by the expansion of the Romans. During the Second Punic War (218-201 BC), the Brettii allied themselves with Rome's enemy, Hannibal of Carthage. In this conflict, the Brettii were completely invested in the alliance with Carthage and the entire region of Bruttium became a veritable Punic fortress. Unfortunately for the Brettii, they had supported the losing side in this conflict and the Romans eventually subjugated Bruttium.
This Zeus coin was minted in Bruttium during the Second Punic War. In Greek mythology, Zeus oversaw the universe and was the "Father of Gods and Men". He ruled the other Olympian Gods as both a father, as head of the family and as King. Zeus was the God of sky and thunder and his symbols are the bull and oak, along with the thunderbolt and eagle, which is shown on the reverse of this coin. Known for his escapades, Zeus fathered many godly and heroic children including Aphrodite, Athena, Apollo, Artemis, Hermes, Persephone, Dionysus, Perseus and Hercules.