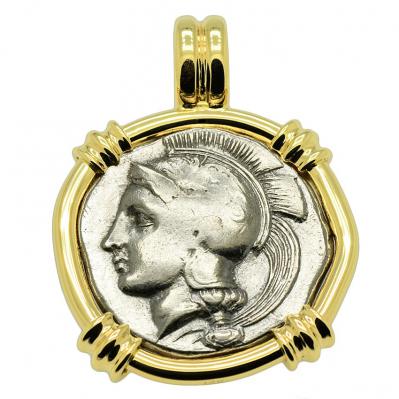 This rare 4th century BC coin was minted in the city of Velia, which was located in the region of Lucania, along the west coast of present day southern Italy. Velia was founded in 540 BC by Greek settlers from Phocaea, who fled the Persian conquest of their city in western Asia Minor. This ancient city, also known as Elea, was famous for being the home of the philosophers Parmenides and Zeno of Elea, as well as the Eleatic school of which they were a part. Southern Italy, with its many Greek colonies, became known as Magna Graecia and ancient Greek culture was exported to Italy in its language, religious rites and traditions. This would eventually leave a lasting imprint on the civilization of ancient Rome.
Athena is shown on this coin wearing a crested Athenian helmet decorated with a griffin. She was revered by the Greeks as the Goddess of wisdom, peace, warfare, strategy and reason. An armed warrior Goddess, Athena appears in mythology as a helper of many heroes, including Odysseus, Jason, and Hercules. She never consorts with a lover, earning the title Athena Parthenos "Athena the Virgin", hence the name of her most famous temple, the Parthenon on the Acropolis in Athens.
Athena was associated with birds and often appears attended by her wise owl, which is shown on the reverse of this coin flying above a lion. The lion was an admired beast renowned for its power and hunting prowess, and lions had been depicted in Greek art for centuries before coins were minted.