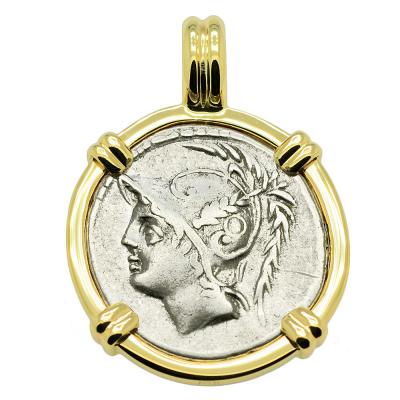 In 211 BC, the Roman denarius coin was introduced and was the equivalent of around 2 day’s pay for a Roman Soldier. This Roman denarius coin was minted by moneyer Q. Minucius Thermus in 103 BC. Mars is featured on the obverse, wearing a crested helmet ornamented with a plume and annulet.
In ancient Roman mythology, Mars was the god of war, an agricultural guardian and a father of the Roman people. He was second in importance only to the king of the gods Jupiter. Mars was the most prominent of the military gods worshipped by the Roman legions. The festivals for Mars were held in March, the month named for him (Latin Martius) and in October. These months began and ended the season for military campaigning and farming. Although Mars was the god of war, he was not viewed as a destructive force. Instead, Mars represented military power as a way to secure peace. He was also believed to be the father of the twins Romulus and Remus, whom were the original founders of Rome.
The reverse of this coin shows 2 warriors fighting, each is armed with a sword and shield. The Roman warrior on the left is protecting a fallen comrade, while the Barbarian warrior on the right wears a horned helmet.