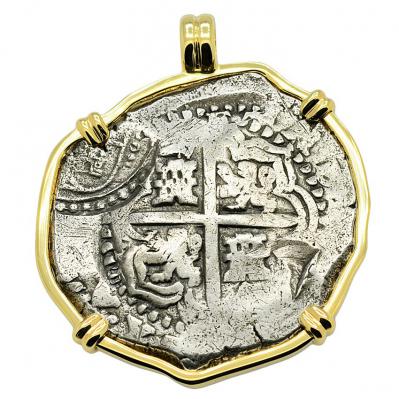 SubAmerica Discoveries salvagers certificate also included. This is a genuine silver coin salvaged from the treasure ship Jesus Maria de la Limpia Concepcion. In 1654, she was the largest vessel yet built for King Philip IV at 122' with 60 cannons and was affectionately referred to as the "La Capitana", the flagship of the Spanish South Sea Armada. Commanded by captain Don Francisco de Sosa, La Capitana set sail with a registered cargo of 2,212 silver bars and 216 chests of silver coins.
On October 26, 1654, a pilot error caused the ship to strike a submerged reef near Chanduy, Ecuador. La Capitana was so overloaded with treasure, that all efforts to free the ship in 22' of water were unsuccessful. At least 20 people drowned while trying to reach the shore. Captain Sosa and his men managed to salvage 1,500,000 pesos and later the Spanish recovered another 2,000,000 pesos (but probably much more). There was only 3,000,000 pesos registered as cargo, which began a major scandal.
In 1996, the salvage company SubAmerica Discoveries found the La Capitana and recovered the remaining treasure of approx. 10,000 Spanish cob coins, mostly 4 & 8 reales. Many of these were rare transitional and countermarked coins.