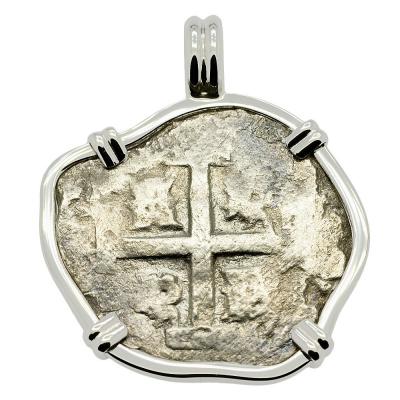 This is a genuine Spanish silver coin salvaged from the treasure ship, The Princess Louisa. This British East India Company merchant ship was named after the youngest daughter of King George II. With two decks and three masts, it was one of the largest ships in the English fleet, built for graceful speed. Captain John Pinson, with a crew of 100, set out on a fourth voyage to Bombay and Persia in March 1743, for trade of silk and spices in the Far East.
Because the voyage traversed through pirate waters, The Princess was accompanied by smaller merchant ships, The Winchester and the HMS Sterling Castle. On April 18th 1743, The Princess Louisa was lost after striking a reef off the Isle of May in the Cape Verde Island chain. As part of her cargo, she carried 20 chests of Spanish and Colonial Spanish currency, totaling 69,760 ounces of silver. An effort to salvage the shipwreck in 1744 was unsuccessful, as were numerous later attempts. Her treasure lie undiscovered for over 255 years, until a 1998-1999 salvage expedition by a well known archaeological recovery company, Arqueonautas located and recovered the historical treasure and artifacts.