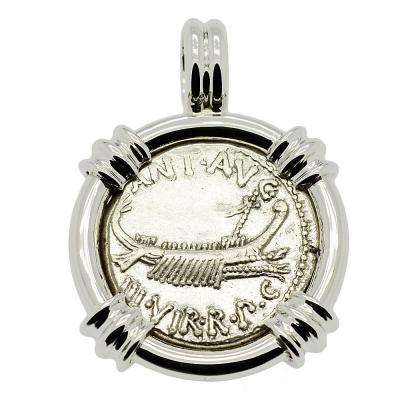 This legionary coin was struck at a military mint traveling with Mark Antony for his fleet and legions and may have been minted with silver from Cleopatra’s treasury. The obverse depicts a Roman galley with oarsmen and the reverse shows an aquila between 2 signa. The aquila, was a prominent eagle standard that each ancient Roman legion carried.
During the conquest of Gaul, Mark Antony became an important military commander for Julius Caesar. After Caesar's assassination in 44 BC, Antony joined forces with Marcus Lepidus, one of Caesar's generals, and Caesar's adoptive son Octavian, in a three-man dictatorship known as the Second Triumvirate. Antony controlled Rome's eastern provinces including Egypt, ruled by Queen Cleopatra. In 41 BC, Antony and Cleopatra formed an alliance and became lovers.
Lepidus was expelled in 36 BC and the Triumvirate broke up in 33 BC, as disagreements between Octavian and Antony erupted into civil war in 31 BC. The Roman Senate, at Octavian's direction, declared war on Cleopatra and proclaimed Antony a traitor. Antony was defeated by Octavian at the naval Battle of Actium on September 2nd, 31 BC. Antony and Cleopatra then fled back to Egypt where they committed suicide. With Antony dead, Octavian assumed the title Augustus and would reign as the first Roman Emperor.