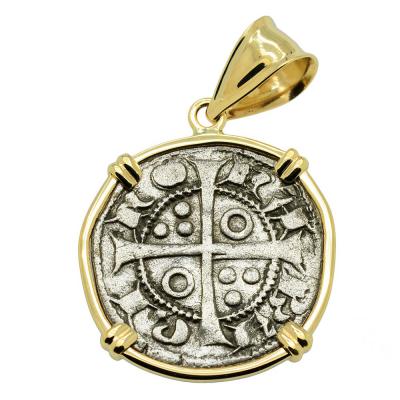 This silver dinero coin was minted in Barcelona during the rule of James II. The dinero coin was the main currency of the Christian states of Spain from the 10th century onward. The obverse side of this coin shows a Cross Pattťe with the legend, BAQINONA, translated to "Barcelona." The reverse side depicts the bust of James II with the Latin legend, IACOB REX, translated to "King James II."
James II ďthe JustĒ was born in 1267 and was the King of Sicily, Majorca, Sardinia, Corsica, and Aragon at varying times throughout his life. He was the second son of the previous King of Aragon, Peter III, and continued his expansionist policies. James became the King of Sicily in 1285 and the King of Aragon and Majorca in 1291 after the death of his elder brother, Alfonso III. In 1295, he was forced to cede Sicily to the papacy, which was subsequently seized by his younger brother, Frederick III, in 1296. The Pope asked James to remove Frederick in exchange for becoming the King of Sardinia and Corsica, which James ruled for the rest of his life. That same year, James wanted to gain access to the Muslim world to the south and successfully invaded Murcia.
During his reign, James established relations with the Ilkhanate in Persia, which helped secure Christians' safe passage to Holy Land sites. James was also a poet and literary patron and in 1300, he founded the University of Lťrida in Catalonia.