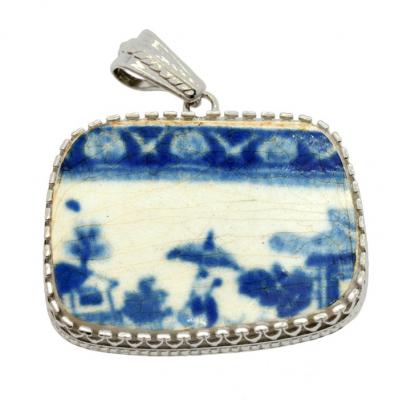 This is a genuine piece of antique British pottery recovered from a colonial era merchantman shipwreck. The ship was sailing in the early 1800’s off the Leeward Islands, in the eastern Caribbean Sea and struck an uncharted submerged rock, sinking to a depth of 55 feet. Much of the British pottery recovered from this shipwreck consists of earthenware, with patterns inspired by Chinese hand-painted porcelain styles, that were popular in 18th century England. After 2 centuries at the bottom of the sea, some of the beautiful designs on the shards of these plates, tea cups, bowls and jugs have survived.
During the colonial period, the Caribbean was the point of departure for enormous wealth shipped back to Europe in the form of gold, silver, gems, spices, sugar, hardwoods, hides and other riches. The Spanish, British, French and Dutch, among others, claimed and fought over these valuable islands.
Throughout the centuries, countless ships from various nationalities passed through these waters. Unfortunately, many of these ships never arrived at their destinations due to hurricanes, uncharted reefs or that unlucky chance meeting with the black flag. The vast majority of these shipwrecks have never been identified, however, each recovered artifact from this adventurous age is a unique piece of history that has its’ own story to tell.