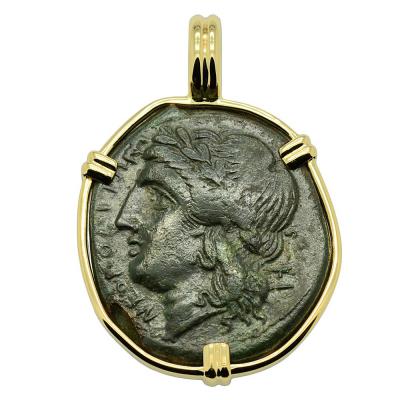 This coin was minted in the city of Neapolis, which is present-day Naples in Italy. Originally settled by colonists from Rhodos, Neapolis was refounded by the Kymaians around 600 BC. Neapolis, with its bustling seaport, grew rapidly becoming one of the most prosperous cities in the region. In 327 BC, Neapolis was captured by the Samnites, but soon-after the Romans liberated the city and Neapolis became an ally and colony of Rome. During the Punic Wars against Carthage, the strong walls surrounding the city repelled the invading forces of Hannibal. Over the centuries, Neapolis maintained its Greek language and customs, becoming a popular tourist resort for Romans.
The obverse side of this 3rd century BC coin features Apollo wearing a laurel wreath. In Greek mythology, Apollo was the god of archers and was worshipped as the god of light and the sun; truth and prophecy; music, poetry and the arts. Apollo was the son of Zeus and as the patron of Delphi, Apollo was the prophetic deity of the Delphic Oracle. Medicine and healing were associated with Apollo and he was seen as a god who had the ability to cure.
The reverse shows a man-headed bull, being crowned by Nike, the goddess of victory. This bull was a representation of the greatest Greek river god, Achelous, who could change into the form of a bull. In a famous myth, Achelous wrestled Hercules for the right to marry the princess Deianira.