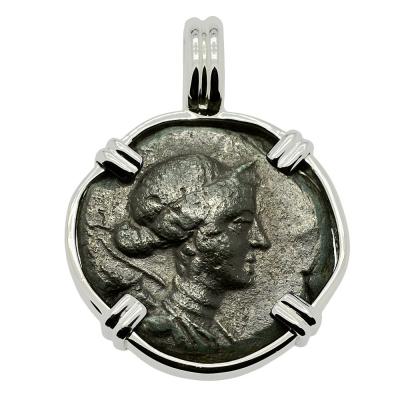 This 3rd century bronze coin was minted in Ephesus, a historic city of great importance to the ancient Greeks. Artemis is shown on this coin as the huntress, carrying her quiver of arrows over her shoulder. In Greek mythology, the Olympian Goddess Artemis was the daughter of Zeus and twin sister of Apollo and one of the most widely admired and worshiped of all the ancient Greek deities.
Artemis was the goddess of hunting, which encompassed all wildlife and her favorite hunting companion was Orion. The stag, shown on the reverse of this coin, kneeling with a bee to the right, was the only animal she held sacred. Artemis was also the goddess of all women, with a particular focus on childbirth. In the city of Ephesus, she was worshiped at the Temple of Artemis, which was one of the Seven Wonders of the Ancient World.
In 334 BC, Alexander the Great defeated the Persian forces at the battle of Granicus and he entered liberated Ephesus in triumph. The Ephesians were surprisingly modern in their social relations. They allowed strangers to integrate and education was highly valued. Through the worship of Artemis, the city also became a bastion of women's rights and Ephesus even had female artists.