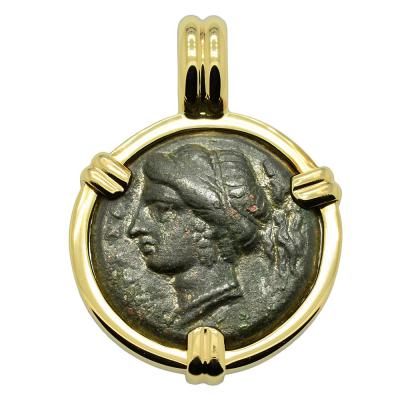 This ancient coin was minted in the Greek city of Syracuse during the rule of Timoleon. Syracuse was founded along the southeast coast of Sicily in 734 BC by Greek settlers from Corinth and the city soon flourished. Timoleon seized power in 344 BC and with the help of Corinth, defeated the attacking armies of Carthage. This freedom inaugurated a long period of peace and prosperity for the Greeks of Sicily, and Syracuse became one of the most renowned capitals of antiquity.
This 4th century BC coin features Aphrodite, the Greek goddess of love, beauty, pleasure and procreation. Her Roman equivalent is the goddess Venus and myrtle, roses, doves, sparrows and swans were sacred to her. In a famous Greek Myth, Zeus delegates the mortal Paris, a Trojan prince, to choose the fairest goddess. Paris chooses Aphrodite after she secretly offers him Helen as a wife. However, Helen is already married to King Menelaus of Sparta. Hera and Athena are so enraged by the choice of Paris that after his abduction of Helen to Troy, they bring about the Trojan War.
The reverse side depicts Pegasus, the Greek mythological flying horse. Pegasus first set foot on Earth at Corinth. With the help of Athena, who presented him with a golden bridle, a young Corinthian nobleman named Bellerophon captured Pegasus while he paused to drink from a spring. He then tamed Pegasus so he could ride on its back and defeat both the Chimera and the Amazons, tasks which would otherwise have been impossible for a mortal.