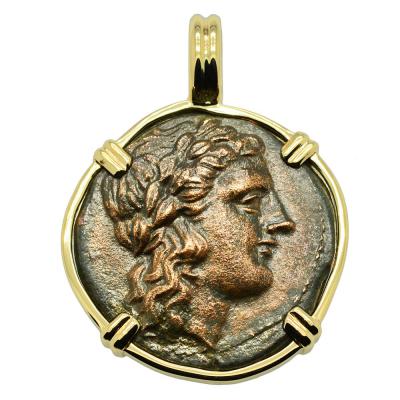 The Greek city of Akragas was founded in 582 BC on the southern coast of the island of Sicily. This historic city grew rapidly, becoming one of the richest and most important of the Greek colonies of Magna Graecia. The remains of the ancient city, such as the Temple of Concordia, the Temple of Zeus and the Temple of Hera all date back to the 5th century BC. Akragas was also the birthplace of the Greek philosopher and politician Empedocles, who according to legend, died by jumping into the active volcano, Mount Etna. In 288 BC, the tyrant Phintias seized power and ruled Akragas and other surrounding cities, until his death in 279 BC. The Romans eventually captured Akragas in 210 BC, however, the city maintained its Greek culture and remained prosperous for centuries thereafter.
This ancient bronze coin was minted in Akragas during the rule of Phintias and it depicts the youthful head of Zeus, wearing a laurel wreath. In Greek mythology, Zeus oversaw the universe and was the "Father of gods and men." He ruled as king of the gods on Mount Olympus and as god of the sky and thunder with the power to hurl lightning bolts as a weapon. Known for his escapades, Zeus fathered many godly and heroic children including Aphrodite, Athena, Apollo, Artemis, Hermes, Persephone, Dionysus, Perseus and Hercules. One of the symbols of Zeus was the eagle, and on the reverse of this coin, two are shown tearing on a hare that has just been caught.