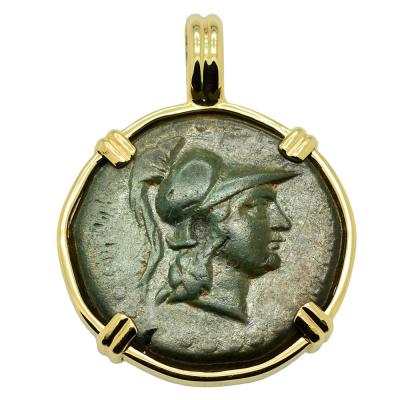 This coin was minted in Soloi, a coastal Mediterranean seaport city that was located in the Cilicia region, which is in present day Southern Turkey. Around 700 BC, Soloi was colonized by Greek settlers from Achaea and the island of Rhodes. With an excellent natural harbor, along with its location to nearby timber-rich mountains and the Cilician Gates passage, Soloi was a city of great strategic importance. In the 6th century BC, this region fell to the Persians, until Alexander the Great finally drove the Persians out of Cilicia in 333 BC. Throughout the Hellenistic Period, Soloi gained considerable autonomy and minted its own coinage, but in 83 BC the city was sacked by Tigranes of Armenia.
Athena is featured on this ancient coin wearing a high-crested Corinthian helmet. In Greek mythology, Athena was the goddess of wisdom, peace, warfare, strategy and reason. Among her gifts to man were the inventions of the plow and the flute, the arts of taming animals, building ships along with making shoes. An armed warrior goddess, Athena appears in Greek mythology as a helper of many heroes, including Odysseus, Jason, and Hercules.
The reverse side depicts Dionysus, standing while wearing bull's horns and holding a kantharos cup and a thyrsus. Dionysus was the son of Zeus and a major figure in Greek mythology as the god of wine, agriculture and theater. He was also the Liberator, freeing one from one's normal self and to bring an end to care and worry with music, ecstasy and wine.