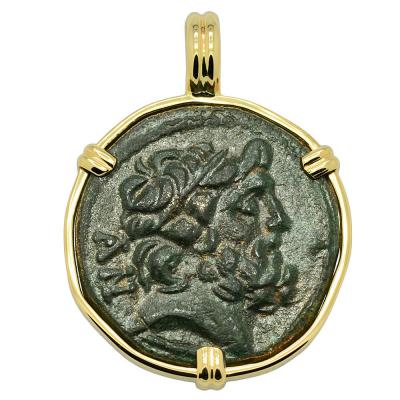 This coin was minted in the coastal city of Elaioussa Sebaste, located in the Cilicia region, which is in present day Southern Turkey. In the 6th century BC, Cilicia fell to the Persians, until Alexander the Great and his Greek army drove the Persians out in 333 BC. The city of Elaioussa was founded in the 2nd century BC on a small island attached to the mainland by a narrow isthmus in the Mediterranean Sea. Elaioussa derives from the word elaion, meaning oil in Greek, as Elaioussa had many olive trees. In 25 BC, Roman Emperor Caesar Augustus assigned the Greek nobleman Archelaus to rule this part of Cilicia. Archelaus built his palace on the island in the harbor and renamed the city Elaioussa Sebaste (“Sebaste” Greek word for “Augusta”), in honor of Augustus.
This ancient coin features the laureate head of Zeus, who in Greek mythology, oversaw the universe and was the "Father of gods and men." He ruled as king of the gods on Mount Olympus and as god of the sky and thunder with the power to hurl lightning bolts as a weapon. Known for his escapades, Zeus fathered many godly and heroic children including Aphrodite, Athena, Apollo, Artemis, Hermes, Persephone, Dionysus, Perseus and Hercules. The reverse shows winged Nike standing while holding a wreath. Nike was the Greek goddess of strength, speed, and victory and she was a close companion of Zeus. It was believed that Nike would fly around the battlefields rewarding the victors with glory and fame.