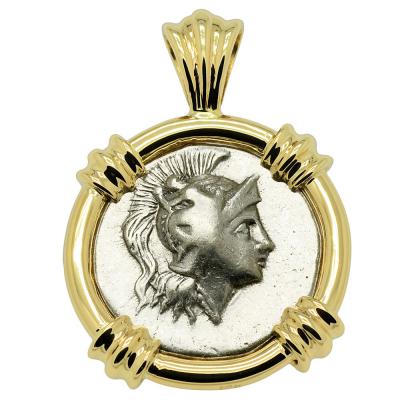 Taras, according to Greek mythology, was the son of Poseidon, the god of the Sea. Legend has it that as a youth, Taras was saved from a shipwreck by riding a dolphin that was sent to him by Poseidon. The dolphin took Taras to shore upon his back and in honor of his rescue, he founded a city at the place where they landed. Historically, Taras was originally populated in the 8th century BC by people from the Greek city-state of Sparta. During the 5th and 4th centuries BC, Taras became the most important Greek city in Southern Italy, ruling over other Greek colonies here. The city was also the center of a thriving decorated Greek pottery industry. However, in 272 BC Taras finally surrendered to the Romans who were expanding throughout Italy. The city maintained its Greek culture and continued to mint their coinage for another 60 years.
This rare 3rd century BC coin from Taras features Athena wearing a crested attic helmet, decorated with an image of the Scylla monster. Athena was the Greek goddess of wisdom, peace, warfare, strategy and reason. Among her gifts to man were the inventions of the plow and the flute, the arts of taming animals, building ships along with making shoes. An armed warrior goddess, Athena appears in Greek mythology as a helper of many heroes, including Odysseus, Jason and Hercules. Athena was associated with birds and often appears attended by her wise owl, which is shown on the reverse of this coin standing on a thunderbolt with a bunch of grapes to the right.