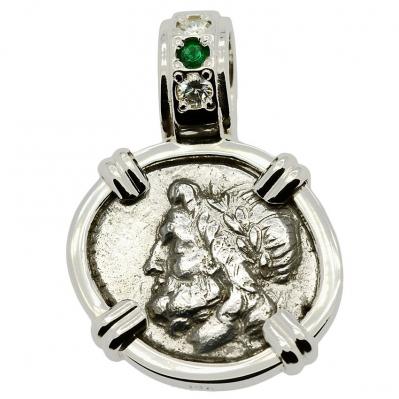 This ancient coin was minted in the southern Greek city of Megalopolis which means “Great City”. Megalopolis was famous for its theater which could hold up to 20,000 people. Nearby coal deposits were prone to catch fire and scorch the area, so the Greeks believed that this was the site where Zeus defeated the Titans with his lightning bolts.
In Greek Mythology, Zeus oversaw the universe and was the "Father of Gods and Men". He ruled the other Olympian Gods as both a father, as head of the family and as King. Zeus was the God of sky and thunder and his symbols are the thunderbolt, eagle, bull, and oak. Known for his escapades, Zeus fathered many godly and heroic children including Aphrodite, Athena, Apollo, Artemis, Hermes, Persephone, Dionysus, Perseus and Hercules.
The reverse of this coin features Pan holding a lagobolon, with an eagle on his knee. Pan is the companion of the nymphs, God of shepherds and flocks, of mountain wilds, hunting and rustic music. His name originates from the word paein, meaning "to pasture" and he has the hindquarters and horns of a goat. With his homeland in rustic Arcadia, he is recognized as the God of fields, groves, and wooded glens. Because of this, Pan is connected to fertility and the season of spring.