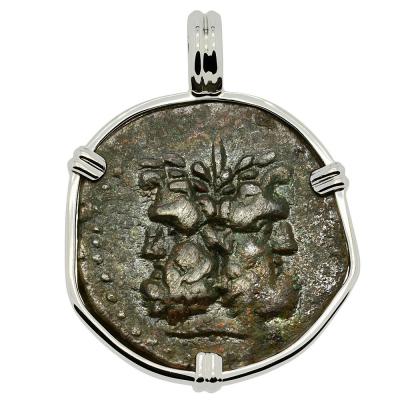 This rare coin was minted in the ancient city of Panormus, which was located on the northwest coast of the island of Sicily and is the present-day city of Palermo. This city was originally founded in 734 BC by Phoenician maritime traders and it grew to become an important colony, represented by the massive defensive walls erected there in the 5th century BC. During this time, the Sicilian Wars began, a conflict fought between the Greeks of Syracuse and the Phoenicians of Carthage for control over the island of Sicily. The Sicilian Wars ended in 265 BC, when Carthage and Syracuse ceased warring and united in order to stop the Romans from gaining full control of the island during the First Punic War. In 254 BC, Panormus was besieged and conquered by the Romans and thereafter became an important city in the Roman Empire for the next 1,000 years.
This ancient bronze coin depicts Janus, who in Roman mythology was the god of gates, doorways, time, transitions, beginnings and endings. His most prominent remnants in modern culture are his namesakes: the month of January, which begins the new year and the janitor, who is a caretaker of doors and halls. He is most often shown as having two bearded faces or heads, facing in opposite directions. Janus represented time and had the wisdom of surveying both the past and the future simultaneously. He was worshipped at the beginnings of the harvest and planting times, as well as at marriages, births and deaths. Janus also presided over war and peace and his temple in Rome was of great importance.